AN ABRIDGED HISTORY OF ISRAELI HAND TO HAND COMBAT FROM 1920 THROUGH 1964 (Part 3 of 3)
By Noah Gross
This is the third and final part of the article in which I will attempt to present an abridged timeline of historical facts and events that are central to the development of Israeli hand to hand combat. The period covered spans from the late 19th century until 1964. The reason for the late 19th century as the starting point is due to that being the period in which European Jews began immigrating to the land of Israel in what they saw as a return to their homeland. The end point is in 1964 when Imi Lichtenfeld retired from the IDF and started teaching Krav Maga in the civilian arena.
1921-1929
This was the decade in which the political arena developed with a right left and center representation formed.
Sports clubs and youth movements were founded, but it was also a time of meager means and financial crisis.
For the “Hagana” this decade was a time of slow and humble beginnings. Its function as a national defense organization was weak.
It was more of an association of loosely connected local self-defense groups cooperating with each other, than a well-organized national organization.
It was plagued by meager financial means and lack of unity.
In 1920 six months after the death of Joseph Trumpeldor and seven additional defenders at Tel-Chai, “Gdud-HaAvoda” (The Work Battalion) named after Trumpeldor, was founded. It was a communal workers organization, based on a mixture of socialist, communist, and Zionist nationalist ideologies
its “workers companies” were active across the country, in road construction and agriculture.
Originally the name was the Yosef Trumpeldor Labor and Defense Battalion (גדוד העבודה וההגנה על־שם יוסף טרומפלדור). The name was quickly changed removing the word defense as to not draw the attention of the British authorities. Its founders were members of “Hashomer” and the Chalutz movement which Trumpeldor had founded in Russia.
among its leaders were Yitzhak Sadeh, Yehuda Almog, Israel Shochat and Menachem Elkind. Over the decade of its existence there had been 2500 members with its high point of 660 members in 1925. “Gdud” members drained swamps, paved roads, worked in agriculture and construction, and established several kibbutzim.

the leaders of “Hashomer” found themselves after WWI ended in Palestine (1918), in a situation in which their organization had changed due to a shift in the makeup of its members with several key figures such as Eliyahu Golomb whom was aligned more with the “Histadrut” and less with their original vision of the organization. When pressed in 1920 to merge with the newly formed “Hagana” they complied grudgingly.
“Hashomer” veterans saw an opportunity in the newly formed “Gdud HaAvoda” and in 1921 formed a secret order within the “Gdud”.
The organization was called “Hakibutz” (the gathering) and dedicated itself to issues of security. “Hakibutz” comprised of approximately 100 members half of which were “Hashomer” veterans and half of which were recruited from the ranks of the “Gdud”

That same year severe Arab riots broke out across the country.
The pretext was protest against the British support of the Balfor declaration, promising the Jews a state in Palestine. Many Jews were murdered and injured. The “Hagana” entrusted with the defense of the Jewish population was not able to mount a timely, coordinated and effective defensive response. The Jewish community and the organization were shaken by these events.

In response to this failure, the “Hagana” set out to grow and develop.
Putting attention on monitoring and anticipating possible future events. The organization started recruiting volunteers in all communities and started training them as an auxiliary force to be prepared for future events. A training course had begun, which was staffed by a permanent group of instructors led by Yitzhak Sadeh.

Friction continued growing between the leaders of Hashomer and Golomb representing the veterans of the “Jewish brigade”.
“Hashomer” members wanted to continue relying on a small closed circle of operatives, while the “Hagana” wanted a much broader inclusive recruitment. After losing this argument, “Hashomer” members quit the “Hagana” in 1923. Losing the experienced “Hashomer” veterans had been a blow to the young organization.
On the international Jewish scene things came to a head when Zeev Jabotinsky left the World Zionist Organization (HaHistadrut HaTzionit Ha’Olamit), or WZO.
” The WZO served as an umbrella organization for the Zionist movement, whose objective was the creation of a Jewish homeland in Eretz Yisrael”
Jabotinsky went on to establish a new revisionist party called Alliance of Revisionists-Zionists and its youth movement called Betar (a Hebrew acronym for the “League of Joseph Trumpeldor”).
Jabotinsky had been at odds with the “Hanhala Hzionit” the Executive Committee of the WZO, regarding the “Hagana” which he viewed as amateur. To further worsen things the “Hagana” was at odds with the “Hanhala Hzionit” over the committees attempt to have the “Hagana” recognized and sanctioned by the British mandate command. The result was a worsening of relations between these organizations.

In 1924 the fourth Aliyah began. Its main impact was the growth of Tel-Aviv as a city.
in 1925 “Hapoel” the workers sports organization was founded.
It became a home for workers who wished to engage in sports and athletics but did not find a home in “Macabi” which was much more aligned politically with the members of the central “Hugim Ezrahiim”
“Machanot Haolim” founded in 1926, was the first Hebrew youth movement founded in Israel. The founders were mainly students from “Gymnasiya Herzelya” from an upper- and middle-class background who were looking for a way to fulfil ideals of social involvement, settlement and Zionism.
1926 to 1927 were years of financial crisis, further slowing the development of the ‘Hagana”.
From its founding in 1921 “Hakibutz” as an organization was embroiled in controversy. It was formed by “Hashomer” veterans who were for all intents and purposes supposed to merge with the newly “Hagana”. However, to them the “Hagana” was not selective enough in its recruitment of members and as such amateur. Secondly, they were independent in nature while the “Hagana” was governed by a political bodies, the “Histadrut” and the WZO.
While the organization was seemingly secretive, it was too large and involved too many members who also had ties with the “Hagana” to not be known to the “Hagana” command. Further more they were an active element focused on issues of security within “Gdud HaAvod” whom one of its purposes was defense.
It seems that a blind eye was turned on the organization and it was tolerated at least at the beginning.
“Hakibutz” founded a military academy in Tel-Joseph which included a substantial training curriculum. They had even sent several members to acquire military knowledge in Europe including naval and aviation skills. During their years of activity, they amassed a cache of weapons which was greater than that of the “Hagana”.
Over the years “Hakibutz” engaged in activities which were quite controversial and ultimately led to the disbandment of the organization. One such activity was a rubbery of gold from a Jewish merchant and money changer. Another was intercepting a cache of weapons being smuggled for the “Hagana” and taking for the organization. In 1923 memers of “Hakibutz” murdered an Arab police commissioner named Taufik Bey to whom they had mistakenly attributed an active role during the 1921 riots. In 1924 they performed what is considered the first political murder in Israel, when they murdered Jacob Israël de Haan, a religious lawyer, journalist and poet who was a anti-Zionist activist.
Later on, “Hakibutz” weakened as an organization due to rifts within the “Gdud”. In addition, a large group of members left and returned to Russia . Under pressure from David Ben-Gurion members of “Achdut HaAvoda” and the “Histadrut” formed an investigative committee. “Hakibutz” members were accused of taking irresponsible action which impacted the “Hagana” negatively and put the Yeshuv in danger. One of the accusations was that they had plotted to murder David Ben-Gurion. The committee concluded that the organization must be disbanded, and its weapons handed over to the “Hagana”.
By this time, January 1927, “Hakibutz” as an organization was to weak to resist and complied.
Although “Hakibutz” had run a fairly well organized military training academy, no documentation has even ben found attesting to hand to hand combat training within the organization.

Another development in the arena of hand to hand combat, was the founding of Baitar movement School for leaders/Instructors.
The school was founded and led by Yermiyahu Halprin, o of the famous Michal Halprin.
Documentation from the school’s activity in the form of photographs, official publications, manuals and testimonies, evidence a very rich training curriculum which included: Boxing, Savate, stick fencing and Jiujitsu. This type of activity continued into the 1930’s and early 1940’s slowly dying out. To date no documentation has been found evidencing a transfer of knowledge to the “Hagana” and its members. Interesting as this episode may have been, it failed to contribute to the development of Kapap and Krav-Maga.
1929 saw the falling apart of “Gdud Havoda” whose members decided to join the Kibutz movement as well as the end of the fourth aliya. It was also a pivotal year for the “Hagana”.
The Arab community in Mandatory Palestine was experiencing some friction over questions of leadership playing out in the race for mayor of Jerusalem. El Husseini lost to the Nashashibi family and was radicalizing his anti-Jewish rhetoric. In addition discontent with the Yeshuvs presence and success in recovering from the economic crisis raised tensions as well. The riots broke out during a time when there was a vacuum in leadership in the British Mandate and the Yeshov leadership which was attending the Jewish congress in Zurich.
For six days during August 1929, Arabs rioted across the country attacking Jew and settlements. With over 133 Jews murdered and 339 injured as well as communities being abandoned and destroyed, the riots sent a shockwave through the Yeshuv and the “Hagana”.
Although wherever there were “Hagana” squads, they functioned well and reduced considerably the number of Jews hurt, there were still communities which were unprotected and suffered greatly.
The conclusions drawn by the leaders of the “Hagana” were a need for a much stronger and better trained body of members. The need for a more centralized command. The need for greater financial means.
Looking back at the decade focusing in hand to hand combat disciplines, one does not find any major developments. There is anecdotal evidence of undescribed hand to hand combat training within local “Hagana” groups which seem to have not been part an organizational effort.
Boxing seems to have been the discipline which experienced the most growth in the 1920’s.
Members of the Jerusalem branch of “Macabi” sports club seem to have had access to Boxing, fencing and wrestling. Moshe Rozenberg a “Hagana” member in Jerusalem and a member of Baitar was involved with boxing in Jerusalem. In 1928 he was second in command of the “Baitar” School for leaders/Instructors.
Another figure in Boxing was Emil Avineri an immigrant from the Ukraine whom received his boxing training in Germany.
Avineri attempted to collaborate with the local “Macabi” branch but was turned down. He opened a boxing club in Tel-Aviv in 1928, initially called “Box Club” and then later changed to “Beni-Leonard”.
That same year Avineri was the first Jew to compete in an official tournament organized by the British and drew a tie against the Royal Navy heavy weight champion, even though he himself was a middle weight. 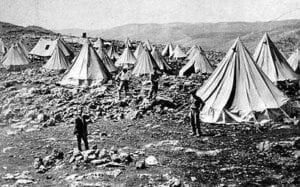 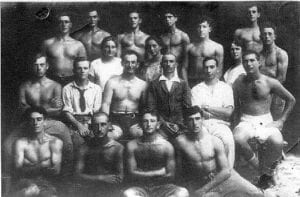 The first “Hagana” officers course also known as the “comedianchikim” 1921