This is the second part of the article in which I will attempt to present an abridged timeline of historical facts and events that are central to the development of Israeli hand to hand combat. The period covered spans from the late 19th century until 1964. The reason for the late 19th century as the starting point is due to that being the period in which European Jews began immigrating to the land of Israel in what they saw as a return to their homeland. The end point is in 1964 when Imi Lichtenfeld retired from the IDF and started teaching Krav Maga in the civilian arena.

1914 -1920
The period leading up to WWI, the war itself and its aftermath were times of extreme difficulty in Ottoman Palestine.
Death by starvation and disease, expulsion of a portion of the community and incarceration of activists brought the activities of “Hashomer” to a standstill and created a vacuum in the arena of security. In 1920 “Hashomer” was officially disbanded and the “Haggana” formed to replace it and take over its duties. Much politicking was involved in this process. During the war many Jews joined the Ottoman army, receiving military training and gaining access to weapons. At the same time activists among the Jews expelled to Egypt coordinated efforts with Jewish activists in Europe and fostered a collaboration with Britain, and formed Jewish brigades serving under the British flag. These brigades were populated by Jews exiled from Palestine and volunteers from the United States and Europe. Here too, and even more so, valuable military training was gained. Jewish officers, sergeants and soldiers learned military hierarchy and structure, methods of training and military skills. No documentation, yet, has surfaced regarding hand to hand combat training save for Bayonet fighting, which featured prominently during the war.
The British forces completed the conquest of Ottoman Palestine the summer of 1918. The civil governance began on July 1st, 1920.
(the official mandate from the league of nations began effectively in September 1923)
this interim period was volatile, during the winter and spring of 1920, there was friction with Arabs in the north of the country and in Jerusalem.
The political leadership of the Jewish community was split over the subject of security and the question of whether the Jewish community can rely on the British forces for protection from Arab violence. The presence of the Jewish brigades near Jerusalem led some to hope they would be mobilized in time of need.  When the need arose in the spring of 1920, hopes were dashed and the harsh reality set in, the British mandate forces could not be relied on for protection.
leading up to the brewing April riots anticipated in Jerusalem, a security comity formed. Represented in it were “Hashomer”, and additional activists of varying political views. Among them was Zeev Jabotinsky (a rising political leader and one of the key figures in the formation of the Jewish Brigades) representatives of “Macabi” sports club, and groups of local laborers.
The political and strategic divide between those who banked on the British providing protection as would be expected from the ruling power and between those who insisted on self-reliance, resulted in much parading of volunteers armed with sticks and very little actual practical training. When the riots took place, the defenders who marched out onto the streets were dispersed or arrested by the British forces, leaving the streets open to the Arab rioters.

The unified workers party formed in 1919, was urged into action by the violence and the leadership convened on June 15th 1920.
At this convention it was decided to transfer the security responsibilities from “Hashomer” to a new body the “Hagana”.
“Hashomer” was deemed incapable and ill-suited for the task due to its lack of activity during the war period and its secretive elitist nature.
“Hashomer” was to hand over its cache of weapons, and its members were supposed to join the newly formed “Hagana” effectively dissolving “Hashomer”.
When in December 1920 the “Histadrut” (workers union) was formed, “Achdut Havod” lead the move to decree that one of the responsibilities of the “Histadrut” would be that of defense, and formed a “Hagana” comity which would govern over the “Hagana”.
The “Hagana” was declared a nationwide organization open for membership to all Jews no matter their gender, vocation or political affiliation.
When zeroing in on hand to hand combat, there is little development during this period.
An addition of boxing is noted in “Macabi” Jerusalem with the arrival of a veteran of the Jewish brigades who joined the club. Another document from the scouts youth movement mentions a plan for the summer camp of 1920 which was to include Jiujitsu training.
Furthermore there is a testimony in the “Hagana” archives mentioning a young German man teaching Jiujitsu to students of “Gymnasia- Herzelia”, this is where Moshe Feldenkarais received his first training in Jiujitsu. 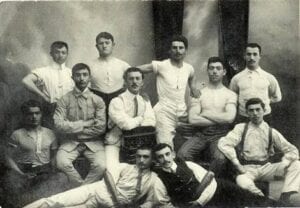 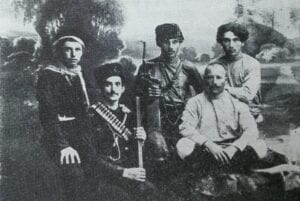 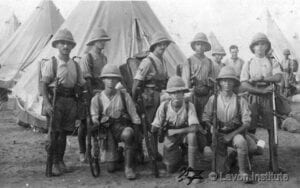 Members of the Jewish brigade WWI 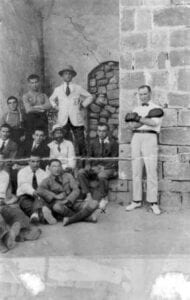 Zeev Jabotinsky and members of the Jerusalem defense of April 1920, in prison in Ako.